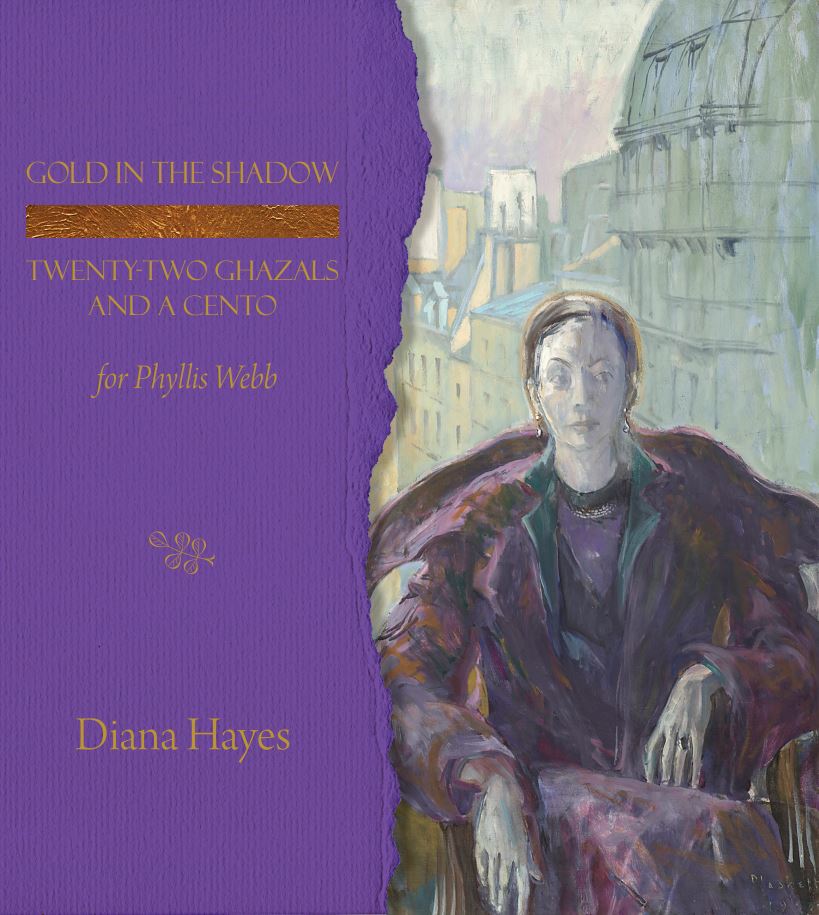 GOLD IN THE SHADOW:
TWENTY-TWO GHAZALS
AND A CENTO
FOR PHYLLIS WEBB

In the book’s introduction, Hayes tells us that these poems were incubating while she worked for several years with Phyllis Webb on a catalogue of her paintings. These carefully crafted ghazals combine textures and themes from Webb’s canvases and poems. The book is a fitting tribute on her ninety-fourth birthday and includes twenty-two poems and a cento constructed with lines from Webb’s book, Water and Light. Daybook entries appear opposite the ghazals and provide references and a kind of topographic guide, revealing the poet’s creative process.

I once stood on a rooftop in Argentina and watched a man, in the square below, tango with an invisible partner. The one he held in his arms moved with him and through him in such a way that it was impossible to tell who was leading and who following. Diana Hayes’s collection Gold in the Shadow: Twenty Two Ghazals and a Cento for Phyllis Webb is a dazzling rendition of such a dance. Like the vesper flight of swifts, these poems recalibrate on the wing, orienting themselves to the echoes of a beloved poet – at the same time they are perfectly themselves. They are enough. They are more than enough. The bones are rising with the moon. Gravitas. She is praised.
— Eve Joseph, author of award-winning books including Quarrels and In The Slender Margin

In inhabiting a form that Phyllis Webb made her own—the ghazal in its Canadian variant pioneered by John Thompson—Diana Hayes draws on images from history and the world to create a homage to Phyllis Webb’s paintings and poems, to the landscapes of a coast she shares with Webb, to the vitality of their friendship and, thus, to the possibility of all poetic becoming and habitation.
— Erín Moure, author of eighteen books of poetry including The Elements and Planetary Noise: Selected Poetry of Erín Moure

As I read through Diana Hayes’s Gold in the Shadow: I’m looking, across the room, at Phyllis Webb’s painting titled “Across.” The painting denotes the crossword puzzle as a visual trope to move the imagination. Hayes’s ghazals configure, also, into a betweeness, a crossing through –Ghalib, Thompson, Webb – that is an assimilation of recognition, a sort of communal identity, something larger. These ghazals, shadowed by the words across from them, next to them, reflect the welcome possibility of “a new century” revealed by “Old stone(s).”
— Fred Wah, author of 30 books of poetry, prose and literary criticism, most recently Scree: The Collected Earlier Poems 1962-1991 and Music at the Heart of Thinking

Read Isabella Wang’s review of Gold in the Shadow, published in The Ormsby Review #1215

Grief is a two-legged crow hop, laughing.
Raven steals your laughter and then the sun.