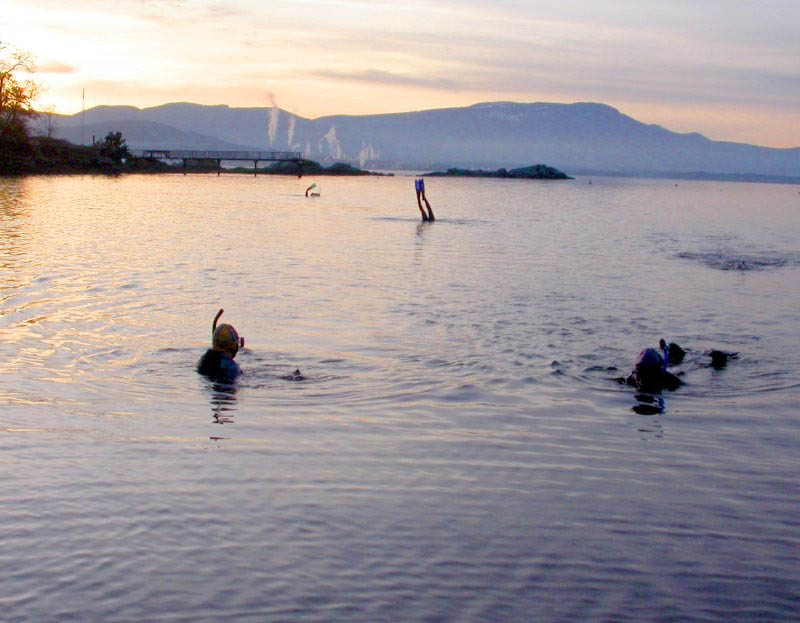 Raven Regan was doing the alligator stroke when she learned she could call herself a Seal. “Today you are one with the ocean,” said her swimming mentor, or Mama Seal, Carol McMahon, acknowledging Regan’s progress after months of apprenticeship with the Saltspring Seals. The Saltspring Seals are a group of women aged forty-five plus, dedicated to year round ocean swimming.

Although a few token male seals sometimes swim with the Seals, like master swimmer Dave Phillips who completed last year’s June “Crossing”, no man has yet earned a capital S via regular dunks in the big cold salt water tank.

To become a Seal, you have to contend with springtime Vesuvius ocean temperature of forty degrees C and walk right past unbailed water turned to ice inside a beached plastic sport yak. Brisk comments, like “the faster you swim, the warmer you get” or “its’ cold but you get numb and then you don’t think about it anymore” are encouraged. But all the Seals agree the first ten minutes in the water require intestinal fortitude.

The gear helps. Neophyte Regan wears two wetsuits-a 5/3 millimetre (the 5 is for the body, and the 3 for the legs), with a 1 millimetre skin underneath. Most of the Seals wear suits in the 5 millimetre range. The Seals don’t loll around after they arrive in the Seal Mobile, McMahon’s big brown van, around 4:30 pm, either. Masks and snorkels in place, and lickedy-split, flippered feet back into the water. Within minutes, the Seals are ripples way way out in the Bay. They swim for an hour, zig-zagging, or doing a 1.5 km. circuit around rocks they call Seal Point, at the mouth of the Bay. Sundays and summers, when the Seals migrate to other island bays and shorelines, swims can be 2.5 km.
As dusk falls at Vesuvius, they’re back on shore, with cups of Seal brew, a mix of Celestial Seasonings Bengal Tiger tea and hot chocolate, chatting before heading home.

Regan, who’s 49, could only dog paddle when she joined up last August, and developed her own stroke, with an alligator-like hip movement. Known as the “Gadget Queen”, she quickly armed herself with divers’ hot packs. But the mask and snorkel weren’t smooth sailing.

“It took me four times before I put the mask on. Then I was clawing the mask off. I was claustrophobic. The fourth time, I had a breakthrough.”

Having breakthroughs is what it’s all about for the Seals.

In 2000, Hayes was diagnosed with breast cancer around the same time she learned her mother’s breast cancer had spread. Following her cancer treatment, Hayes’ feet became so painful she sometimes needed crutches to walk. She was suffering from paraneoplastic syndrome. Cancer chemistry invading her body was causing contracted heel cords. She needed surgery to lengthen them.

All her life, Hayes, who’s 49, had relied on physical activity to cope with stress. But now she was immobilized, and her beloved mother was dying in a Vancouver hospice. The intertwined Celtic serpent tattoos on Hayes’ feet are a reminder of her search for healing during that difficult period. “They’re animals of transformation,” she explains.

“The cold water would take the pain away.”

Then she had a dream. “I had a dream in January, 2002, after my mother died. It involved lowering myself into the water and swimming with fish. The message in the dream was to get into the water.”
Hayes, a poet and photographer, lined up a subject with the intent of capturing her dream images with a camera. “We rented wetsuits. I got into the ocean to take photos and a door opened for me.
Hayes bought the gear she needed and swam, at first just using her arms, all that winter and spring. Her initial swims were the inspiration for the Seals name. “I came up with that because I encountered seals everywhere. I felt in unison with the creatures of the ocean.”

But she soon had a human swimming buddy. Seal Two, aka Dr. Patricia Fibiger, a medical doctor and accupuncturist, asked “What on earth have you been doing?” when she saw a healthier Hayes.
Fibiger had also battled breast cancer, and holds her arm out at shoulder height. “I couldn’t lift my arm any higher than this then.” The doctor now swims daily, and has also taken up motorcycle riding. She calls her bike a “Tonka toy”, and craves a Harley Davidson Street Rod. When she’s asked if she’s just naturally an “achiever”, Fibiger says “no”. The rest of the Seals chorus loudly “Yes you are!”

Fibiger is sold on the benefits of cold water swimming, especially for arthritis sufferers, but says it’s not for those with Reynaud’s syndrome. Fibiger says the endorphins hit after about ten minutes of swimming, and make you feel good, and it’s non- weight bearing aerobic exercise. Several Seals have come to the sport via her office, like Regan who got accupuncture from Fibiger for migraines, but hasn’t had headaches since she’s been swimming. The supple Pat “Yogi” Parkes, who became the third Seal when she joined up in 2003, had had a stroke in 1998, with resulting weakness on her left side. She walked with canes when Fibiger encouraged her to join the Seals. She’d been a swimmer all her life, swimming in Elk Lake while growing up, and she took to the ocean swimming. Her body and her spirit are now both strong. “When you’ve been that close to death, there’s nothing to fear,” says the 58 year old Parkes when she’s asked if she isn’t afraid to be way out there in the ocean depths.

At the end of every swim, Parkes, who also practices yoga, does the ritual “Seal Salute”, a watery handstand that has her flippers waving triumphantly in the air.

Parkes says she won’t use Saltspring’s new indoor pool when it’s built. “I can’t imagine swimming without the clouds moving over my head.” McMahon, who’s Fibiger’s sister, favors Seal night swims. Full moons and phosphorescence put humanity into perspective. “On a clear night you feel like you can touch the stars.”

When she joined the Seals two years ago, McMahon was sixty-three years old, weighed 200 pounds, was arthritic, diabetic and had never exercised. McMahon now swims six days a week year-round and has lost sixty pounds. “I don’t care who you are,” says the straightforward McMahon, “when you start, you’re scared. Your adrenaline is running. It takes three to six swims before folks get comfortable.”

When the comfort level kicks in, swimming with clouds, currents, wind, and even darkness allows swimmers to get into a natural rhythm without hitting pool walls. Seal use of scuba and mask adds a diver’s delight in the depths, what Regan calls “the Jacques Cousteau stuff.

To crank nature up a notch, add distance. The Seals marathon “Crossing” follows in the wake of individual swimmers, like Marilyn Bell, and groups like San Francisco’s Dolphin Club, men and women who swim in San Francisco Bay(which at 50 degrees F is tropical compared to our waters) year round, and organized the first Golden Gate Group Swim in 1917.

Nowadays, marathon ocean swimming, called open water swimming, once the realm of tri-athletes, is attracting keen swimmers of every ilk. Open water swims all over the world are listed at www.oceanswims.com.

But for the Seals, there’s still the crazy label to overcome.

“Do you know how many people think we’re crazy?” asks Catherine Griffiths, known to her fellow Seals as “The Jock”. Griffiths prefers to flaunt her Sealness, grocery shopping in her wet suit on the way to swim dates.

When a hip injury curtailed the running she’d done as exercise for thirty years, Griffiths joined the Seals. She has swimming in her genes. Her father was an Olympian who swam for Britain in 1948. The fifty-two year old Griffiths teaches geography at Camosun College, and will be cracking the whip in the coming months as the Seals train for “The Crossing”. “I’m the one who makes them swim longer. I tell them “We can do this.”

For Griffiths, who also walks to keep in shape, meeting challenges is the essence of more than keeping fit. “Stretch yourself a little further. That’s what life is all about.”

Individual effort within a supportive group sums up Seal swimming. They’re like women who regularly run together. “We’re not swimming as a team. We swim alone. There’s pods of swimmers with similar skills,” says Hayes. For safety, Seals swim to checkpoints, and buddy swim to nurture newcomers.

Seal Elly Silverman points out the Seals aren’t an encounter group. “It’s a closeness that I’ve found in women who work together.” But she adds, “The shared experience is very important to us.”
“There is a swimmer’s high, as in running,” says Hayes. “Your senses are much brighter. The importance of the group is sharing the high and the adventure. There’s something about speaking that language.”

McMahon turns high into uplifting. “If you can do this, you can do anything. Like, bring it on baby.”
For Regan there are layers of Seal power. ” You work in layers, and your confidence grows in layers too.

She doesn’t know if she’ll be able to complete “The Crossing” this June. “Right now, I’m not fast enough.” But for her, as for all the Seals, hope is what’s there when you surface through each layer, of water and life.

So Regan keeps coming to the Bay, remembering the day she first swam to Seal Point, feeling the fear, but swimming anyway, realizing she was in control. She thinks of her exhilaration when she heard her Mama Seal’s words:

Today you are one with the ocean.

back to Salt Spring Seals 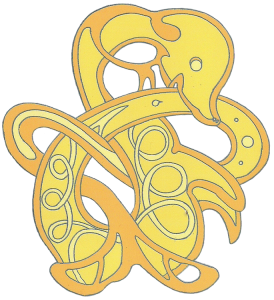