IT ALL BEGINS WITH THE COLOUR RED…

A sky I had never seen, a version of red in fact that does not fit into the spectrum of colour visible to the human eye. Far from cinnabar’s vermilion that appears on a clear evening at sunset on the western shore of a nameless beach, so very bright but soothing as a shawl worn by the woman with no worries or regrets, after a long meandering summer day.
No, this red was other-worldly. A visitation from Saturn’s rings. An indication, foreboding, of great change. The day was February 26, 1979, in the house of Pisces. The birthdate of my heartbreaker, red-headed lover who was no longer visible on the spectrum of my waning heart.

It was the morning of a solar eclipse, only an hour after sunrise. I was well positioned in the northern path limit of the great shadow of the moon. This reversal of day, only a flicker past dawn, causes even the blackbirds to fly back to their roosts, fearing the vengeance of the night sky gods. Uncanny darkness. Creepy silence. A rush of cold air biting the cheeks of naive onlookers, creatures with cameras pointed skyward.

The sun now a segment of tangerine, blood orange, as Annie Dillard describes in her book “Teaching A Stone To Talk”. She sits on the slope of Mt. Adams waiting for the darkness. She had travelled to this precise location, coordinates on the red line of NASA’s map, to experience the duration of totality. One minute, 56 seconds preceded briefly by the alpenglow. She says, “the red light of sunset which holds out on snowy mountain tops long after the valleys and tablelands are dimmed”. There were screams all around. The sun’s corona appears like a wedding ring in a black velvet sky. This will not happen again here, for 375 years.

This was the year after the ginger poet introduced me to Annie’s Pilgrim At Tinker Creek – a brilliant book that has become a life-long companion. For months before the sun’s eclipse I would wake only at sundown as the loneliness in daylight hours shone a piercing headlight on my grief. I wrote in the Insomniac’s Notebook that winter and the space for movement in wide open regions of darkness became my familiar territory.

My grandmother consoled me during those dark months, rubbing my back with the touch of unconditional love that had been my anchor from the day she moved into our family home. I was two, and the poet in me knew, “When the first signs of sorrow appear,/ she does not rush to tamp the wounding/but asks with her heart/where most does it hurt.”

The grieving went on. I spoke of Blackwater Creek, a heron drowned, a gift I had offered as a measure of my lover’s departure. Moving Inland, I named the voices that had surfaced all those years. My father recognized the metaphor and offered me a talisman: the gold blue heron I wear today, nearly four decades later. The bird tells me to be patient, listen to the river. Annie Dillard, sitting patiently a few degrees south, astonished at the platinum sheen of grasses and stone as the sun is stopped behind the lens cap of the moon. White Salmon River and the lights of the Yakima Valley below. 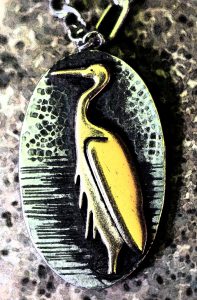 The pendant accompanied me everywhere and later that spring, with bookseller friend in tow, I knocked on the yellow door of the second story flat on Robson Street where I was met by the woman of the house and the warm glow of incandescent light. The air was thick with a scent that has never left me, where on the table in porcelain was a bouquet of boldly opening Freesias: yellow, orange and red. Iridaceae, grown from a corm, zygomorphic, unmistakably perfumed.

I can tell you almost everything about the tableau for that first encounter with Freesias: the antique table, the strawberry daiquiris in large quantities, Herbie Mann breathing Push Push on his phallic flute on the hi-fi, the raucous songs of passersby on the street below. Susan’s just-released Taboo Man, a beautiful broadside published by our host. Hot off the press, regaling the walls, black and white and red, the fonts and images slow-danced into the night.

It all begins with the colour red. Now the year 2012. The miles connect and lead me to the Cascades Volcanic Arc, 34 miles east of Mt. St. Helens, riding the Mount Adams Wilderness on the back of the Bear’s motorcycle, coming home from our Golden Gate freefall down the coast of Oregon and California to Half Moon Bay, where Freesias are plentiful and growers chill the bulbs in proprietary methods to satisfy the cold and necessary slumber for the flowers-to-be. Two nights at the Casa Madrona in Sausalito, fearless and alive.

The colour red follows me. Silk crimson shawl a gift from an Egyptian poet. Worn the afternoon I married for the first time, in my sixth decade, Freesias on the wedding table. Never too late to live happily ever after, he said. Falling in love with a navigator named Bear.

2 thoughts on “It all begins with the colour red…”