THE MUSIC OF STEEL: PRAIRIE ELEGIES 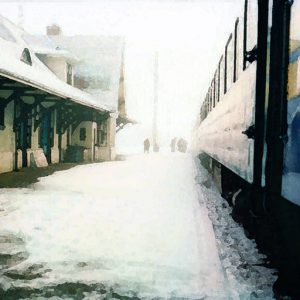 “The music of steel came with ease and regularity in the life of the railways. You could hear it from miles away. You could see the puffs of smoke that accompanied the music. It happened at every crossing, at every bend in the road, at the approach of every town and hamlet along the way… Trains talk. The sweet music of the train whistle was surely a sign of the deep bond that existed between farm folk and train crews all over the west,” wrote my father, in his book about life on the Canadian Prairies, ‘Where Did You Come From?’ The railway was what linked families and farms and provided employment for many pioneers. It was an integral part of growing up in isolated prairie communities.

My father was a first generation Canadian born on the harsh Manitoba landscape in a tent in mid-January 1914. I inherited his passion for family heritage and storytelling.  In his early eighties, he began his homestretch career as a writer and penned a second book by the time he was 91.

The photographs in my first series are from a journey I made by rail several decades ago to visit my maternal family homestead near Nokomis, Saskatchewan. 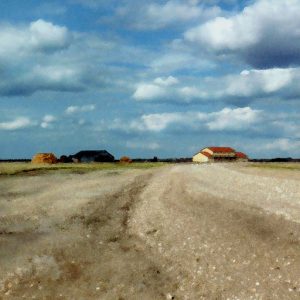 I began shaping the photographs on a parallel theme as I burned the midnight oil over many nights, looking for Cornelius, my Irish paternal great-grandfather. My romantic nature would have me believe he was of the “Tuatha Dé” lineage; a supernatural race in Irish mythology.  The Tuatha Dé brought four magical treasures with them to Ireland: The Dagda’s Cauldron, The Spear of Lugh, The Stone of Fal; The Sword of Light of Nuada. 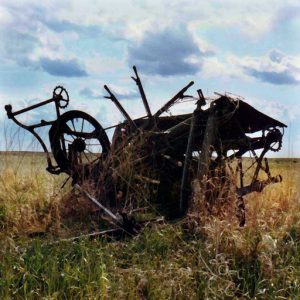 As a tinsmith by trade in the mid-1800’s, my great-grandfather’s tools would have been basic: big shears anchored in a hole in his bench, hand snips and nippers for cutting, flattened on an anvil made of a block of steel. He may have used a hearth to heat up and help shape the raw materials. 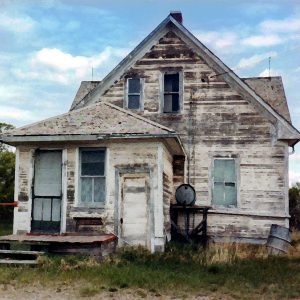 The archival records for Cornelius elude me but nevertheless, he has shown up in several forms: in dreams of course, on distant family tree branches, and most recently through the Ogham Stone. A silver pendant with his name inscribed in the ancient Ogham alphabet arrived yesterday from Brian de Staic’s shop in Dingle, Co. Kerry. Ogham was the first written language in Ireland, the name derived from Oghma, the Celtric God of elocution or fine speech.  The vast majority of the inscriptions consist of personal names. I had requested the pendant as a tribute to Cornelius with the hopes that seeing his name in cryptic letters would provide other clues, perhaps through the ancient alphabet’s association with trees and plants. 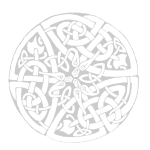